Draft of paper given at Babel Reno in 2017. This is a work in progress; attribute appropriately.

Abstract: A panel for Babel Reno 2017, co-chaired by me and Lara Farina. The conceit: you’re dealt 5 cards from the Farina/Burgess Triomphe Deck. What can you do with the hand you’re dealt? Here’s what I did with mine. Includes three embroidery canvases in a box, stitched with fragments of the Exeter Book and protective incantations in Latin.

Card number one: ace of motives. 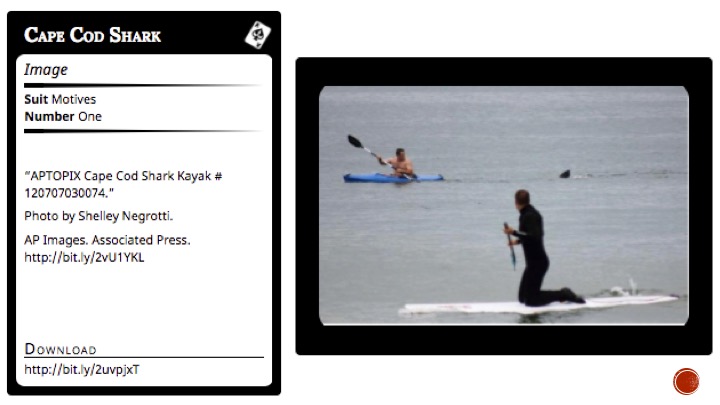 We knew it was coming. Signs in the water. Our Facebook feeds grew unbearable. 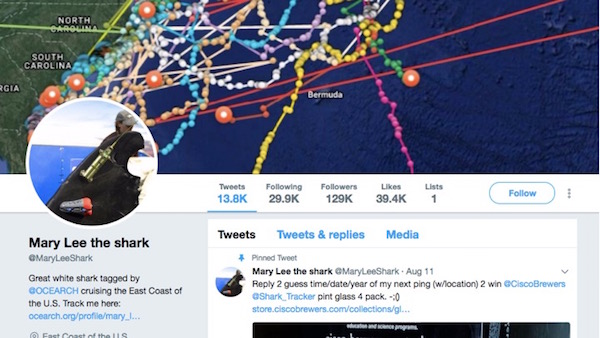 Personally, I’ve a soft spot for sharks: Mary-Lee’s Twitter feed and all. But this was not Mary Lee Shark. 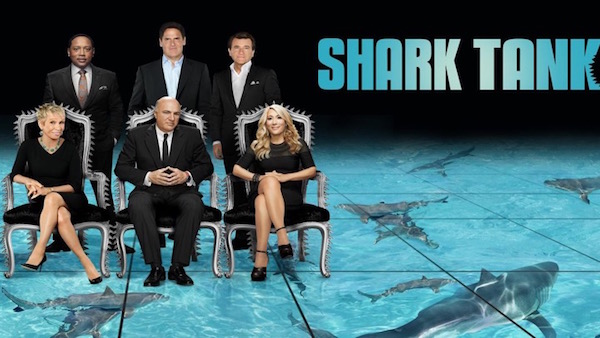 This was the assholes we canonized in Shark Tank. Corporate shark, wearing business casual and clutching a copy of “Entrepreneurship for Dummies.” Shark Week, except it never ends and blood’s in the water. 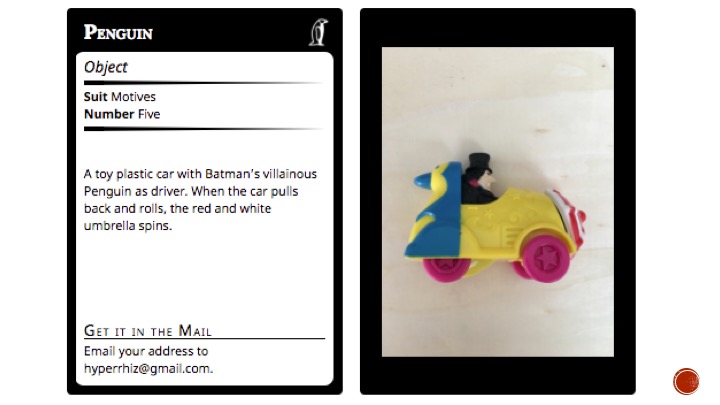 These little fucking cars: all it takes is a little pull back and they zoom forward, like they’ve been released from something. Reason? I don’t know. 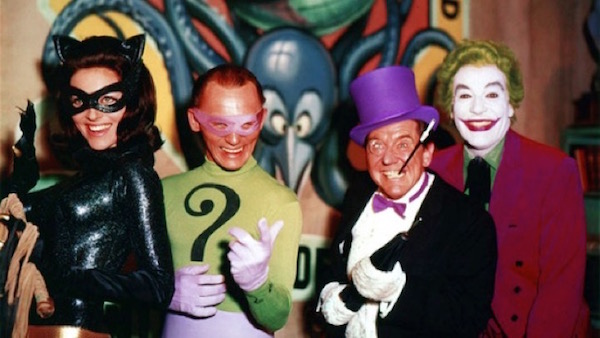 When it arrived, it was like a whole clown car of 70’s villains. I have to say it’s disappointing that the villain I was dealt was The Penguin, rather than The Riddler (which would have synched nicely with another one of my cards, the Exeter Book) or The Joker, who exemplifies more fittingly the alt-right, 4-chan “burn it all down and laugh” crowd. 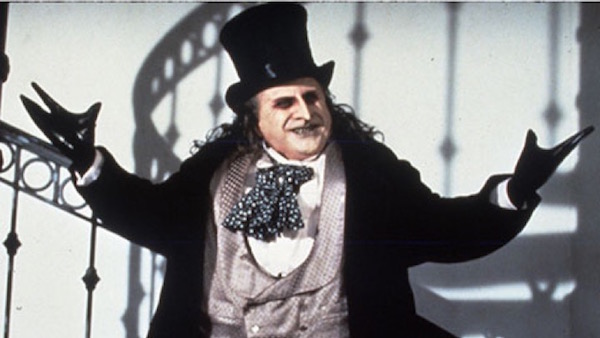 But, it has to be said, the Penguin does have resonances with the hand we’ve been dealt. Of all Batman’s villains, he’s known to be the least crazy but the most corrupt: the mob boss, the shady business dealer, the ornithologically inclined gentleman of crime. He wears a tuxedo, top hat and monocle. Technological tricks fall out of his umbrella. If the Joker can be said to represent the Bannon wing, alt-right clown-faces and all, then the Penguin is the “establishment right” - Exxon executives and Goldman Sachs alums, moustache-twirling baddies, hell bent on high life and plunder.

And let’s be clear: they’re the enablers here. A potential tax cut bill is all it takes to remove any qualms they might have about letting a genuine Joker loose in the white house. In the game of Triomphe, it’s called “robbing the stock”: if a player pulls the ace of the trump suit, they can exchange a worthless card from their hand with a potentially valuable one from the dealer. And keep on doing it, so long as they keep coming up trumps. 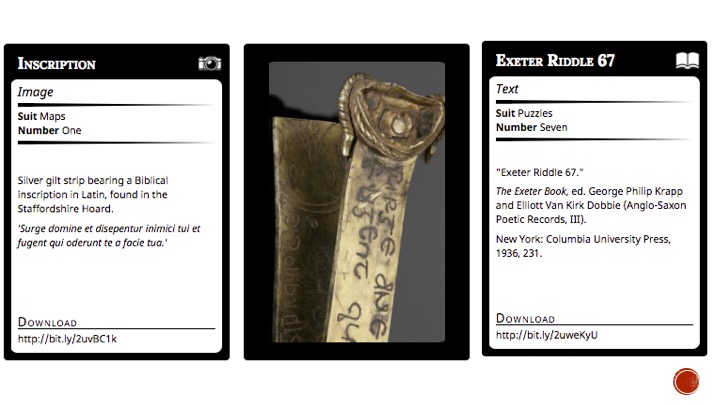 Meantime what are the rest of us left with? To be sure, we are looking at fragments. A piece of metal from the Staffordshire Hoard, engraved hopefully: “rise up, o Lord, and may thy enemies be scattered and those who hate thee be driven from thy face.” The description reads: “Rivet holes show that it was originally fastened to another, larger object. We are not yet sure what this was, but it might have been something like a reliquary or the cover of a Bible.” 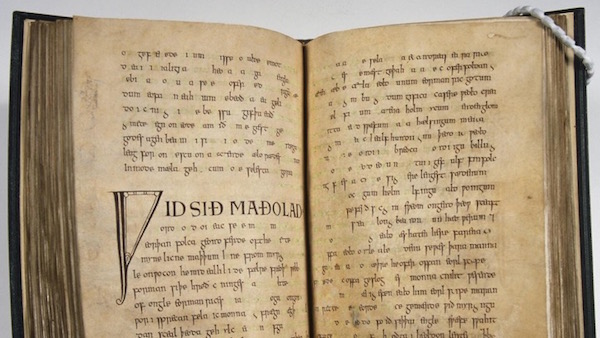 A text card: Exeter Riddle #67. This object resonates nicely, of course, with my third card, the gilt bible clasp:

Wound with silver and plated gold,   I have seen it open where men sit
Drinking together. Now a wise man
Should know what this creature is called. 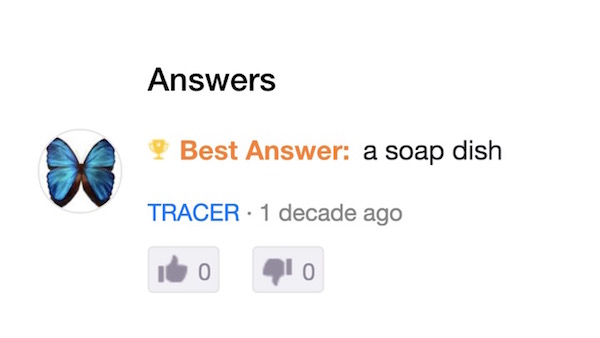 …unless you’re at Yahoo Answers. You do you, Yahoo. 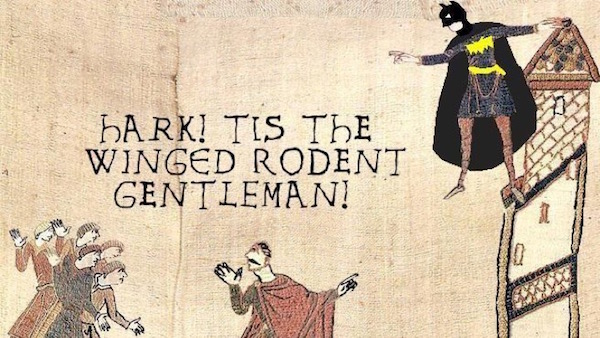 It’s tempting to say that books will help. After all, we’re academics, bookish people. We want to believe we can reason our way out, even when the evidence is clearly against us. But facts are fake news. The books are fixed. Card sharks are coming for us. The call is coming from inside the house, and the house always wins. And there are scary technologies hidden in the Penguin’s umbrella. Surveillance and drones and Twitter. Oh my.

So that’s my hand thus far. Religious gilt-bound books on one side; sharks and penguins on the other. And I draw… 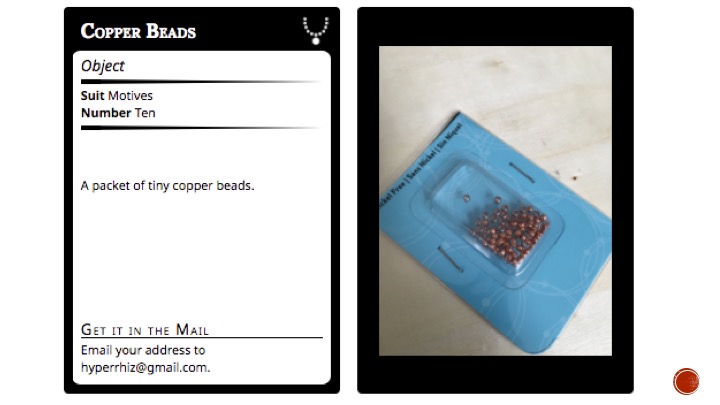 Unexpected. Copper, conductor metal, fine red gold. Of course, copper is how we got into this mess. It’s the metal of communication: The Twitter troll of the table of elements. But it’s beautiful. I stitch with it. And thus my triptych for trying times: riddles wrapped in copper, rather than gold; invocations of protection surrounding them.

Rise up, o Lord, and shield us from the sharks and penguins. 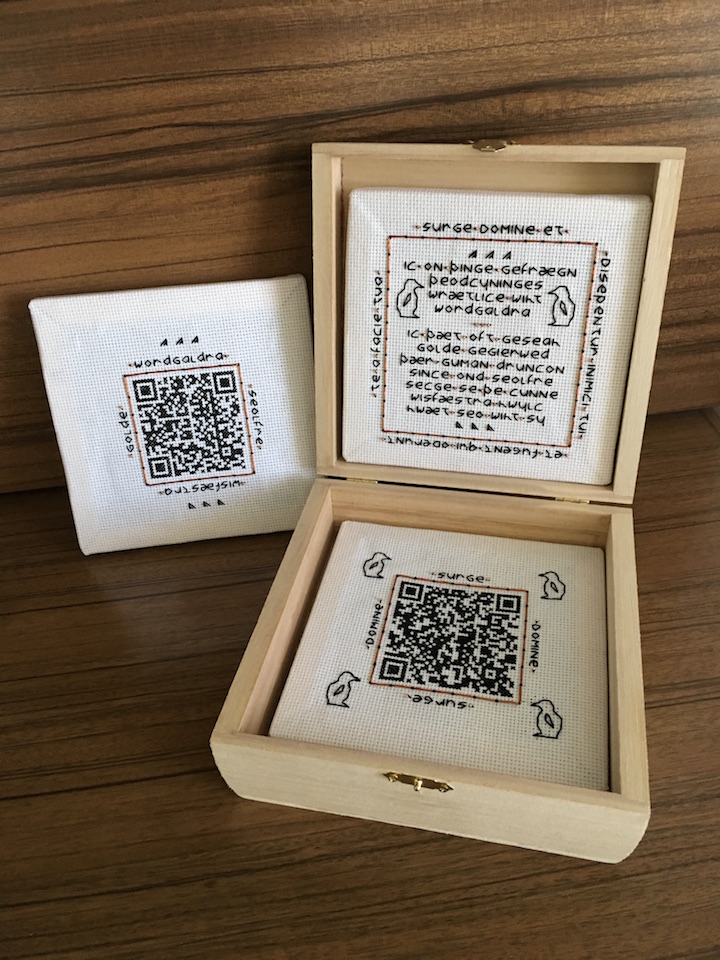 You know I enjoy a good unboxing. 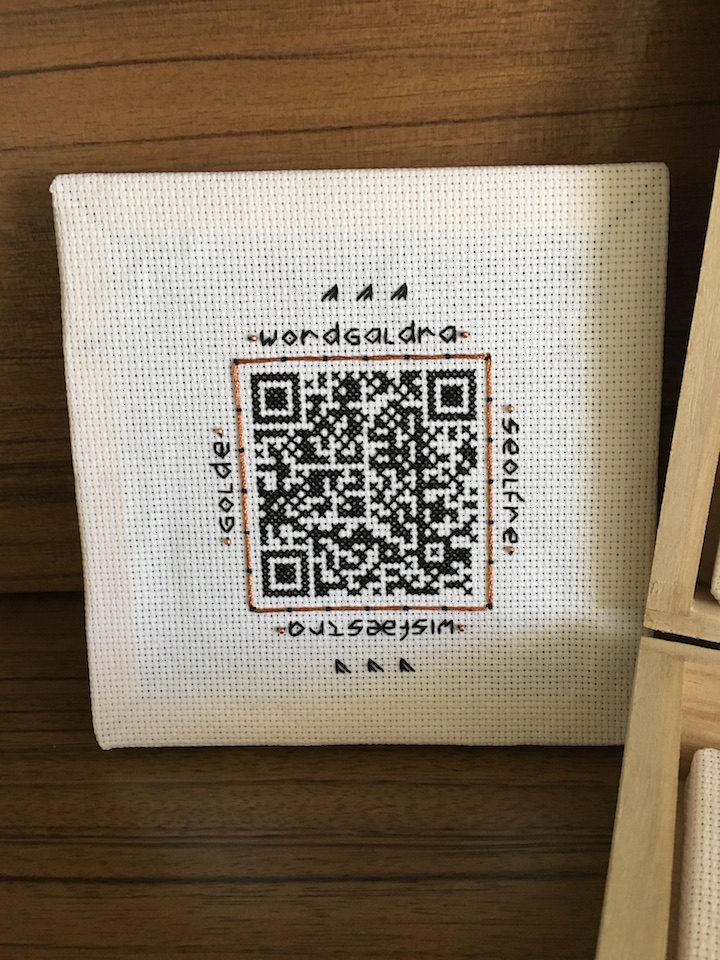 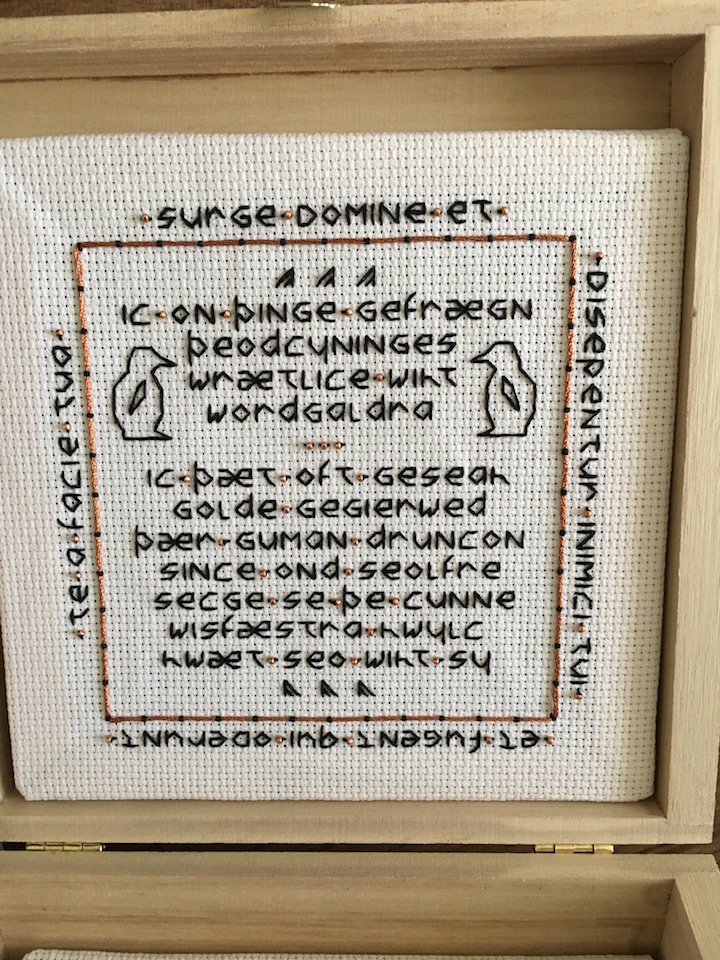 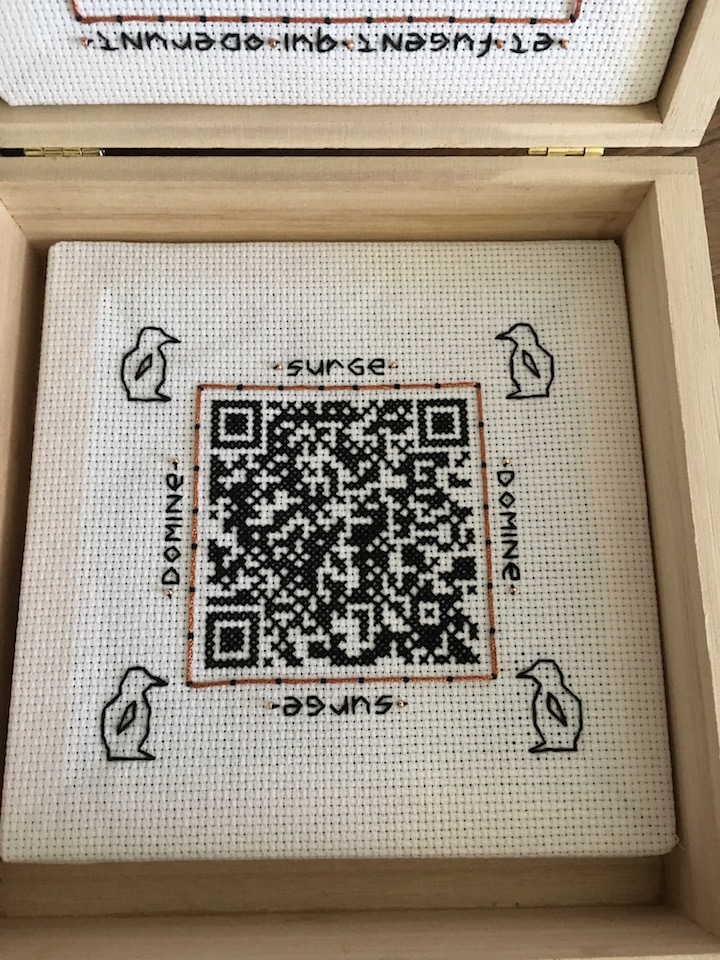